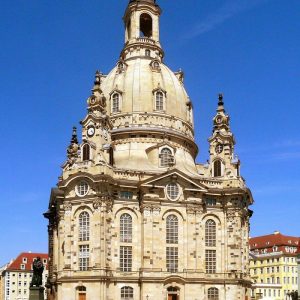 The capital of the province of Saxony is a reborn baroque masterpiece sitting on a wide sweep of the Elbe River. Although almost completely destroyed in February 1945, Dresden is working with German thoroughness to recapture the city’s reputation as “the Florence on the Elbe.” Its yellow and pale-green facades are enormously appealing, and their mere presence is even more overwhelming when you compare what you see today with photographs of Dresden from February 1945, after an Allied bombing raid destroyed the city overnight. Dresden was the capital of Saxony as early as the 15th century, although most of its architectural masterpieces date from the 18th century and the reigns of Augustus the Strong and his son, Frederick Augustus II.

Though some parts of the city center still look as if they’re stuck halfway between demolition and construction, the present city is an enormous tribute to the Dresdeners’ skills and dedication. The resemblance of today’s riverside to Dresden cityscapes painted by Canaletto in the mid-1700s is remarkable. Unfortunately, the war-inflicted gaps in the urban landscape in other parts of the city are too big to be closed anytime soon.

While each guide does each tour differently, there are standard sites that are generally always included in a visit to Dresden. The itinerary can always be changed based on your own preferences, so please always discuss these things prior to your tour with your guide. The order in which the sites are shown are also always different based on the starting point which you have agreed upon with your guide.

On a standard Dresden tour, you can expect to see the following: