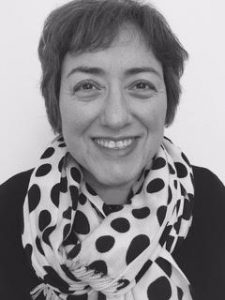 Born and raised in New York, I came to Berlin in 2001 with two toddlers in tow. Having married a German artist, it seemed inevitable that one day I would follow him to Berlin on one of his numerous art symposia. It was love at first sight when I saw the intricate stucco on those high ceilings in my new Berlin apartment, and I knew this city had many stories to tell.

My background in media led me to work as a researcher in German television and then as an educator before I went back to school in Berlin for a Master’s degree in Holocaust Communication and Tolerance.

I know Berlin. I have worked here, raised my kids here, and as a long-time tour guide, I still have an intense curiosity and enthusiasm for the many stories unfolding in this city. Stories of the 20th Century, the great wars, the Jewish presence, the divided city, and now the influx of refugees, somehow it all comes together as Berlin is finally coming into its own. Let me share that story with you.