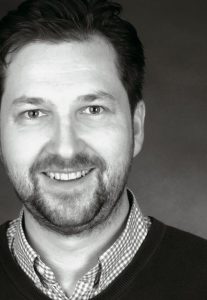 My name is Robert Sommer. I grew up in East Berlin during the 1980s and I’ve been working as tour guide for more than 10 years. I’m specialized in walking tours focusing on life in East Berlin during the Cold War, Jewish life in Berlin, and the Nazi period. Besides explaining the history of Berlin, I have many personal stories to tell especially about the Fall of the Wall and the reunification of Germany. I actually stood on top of the Berlin Wall at the Brandenburg Gate in November 1989; unfortunately, I haven’t found myself in any of the pictures taken that day.
History, culture and languages have always been my passions. I studied at the University of Florence (Italy) and then at the Humboldt University of Berlin, which was where I received my PhD in History. My dissertation focused on forced prostitution in the Nazi concentration camps. In addition to guiding, I work as an independent historian and researcher for various film production networks, including the BBC, the ARD and Polish TV2. Furthermore, I’m professionally involved at concentration camp memorials, like the Ravensbrück Concentration Camp just north of Berlin. I also give lectures on the Holocaust for various universities (e.g. Brown University, Hampshire College and DePaul University).
My showing Berlins means to pass on the love I have for this city to someone else. Berlin is the most amazing and vibrant city I know. I love to travel, but I always come back to Berlin. It‘s a city which stays inside of you and never lets you down. And so I take pride to say in our dialect: “Berlin, ick liebe dir!” (Berlin I love you).