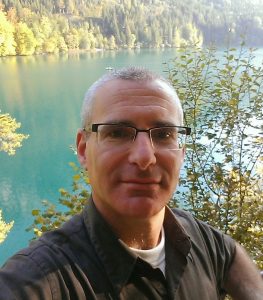 My name is Lior Nitzan. I was born and raised in Israel. I came to Berlin in the summer of 2010 as part of my Ph.D in Philosophy. My bachelor degree is in Law (LL.B) and I am a certified Lawyer in Israel through I never practiced law. I then did my M.A. and my Ph.D in Philosophy in the University of Haifa. My philosophy research focused mainly on the work Immanuel Kant and German Philosophy from the 17th to the 19th century. In Berlin I was a guest of the Humboldt Universität.

I and my Partner, who is a conceptual artist, decided to stay in Berlin. I find the city fascinating, challenging intellectually and very welcoming. Berlin is cosmopolitan, very multicultural, open and liberal. I have been working as a tour guide since 2012.

I mostly focus on historical tours of various kind: General highlights tours, Third Reich tours, Jewish Berlin tours, Cold War tours, Potsdam tours, Sachsenhausen tours and more. We can also include the Avant-garde side of Berlin and see some of the “cooler” neighborhoods. I can do walking tours using public transportation or using a private driver. I have done small and big groups, with or without a bus.

I mostly work through Gablinger Berlin Tours and Insider Tours.

The philosopher Walter Benjamin, a Berlin native, said that Paris was the Capital of the 19th century. In the same spirit, one can say that Berlin is the capital of the 20th century. For better or for worse, all major milestones of the 20th century are traced back to Berlin. Walking through the streets of Berlin is like going back in time. Understanding Berlin history means understanding European history and world history.

I will be glad to share my passion for history and for the city of Berlin with you!