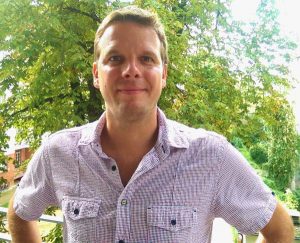 I was born and raised in West Berlin and was 10 years old when the Wall came down.

After finishing high school I did my civil service in a hospital in the south-west of Berlin and then went to Spain, to the University of Seville to officially study economics, but mainly to learn the language and get to know the people and culture in the south of Spain.

After almost 2 years I went back to Germany, not to my hometown Berlin, but to Cologne in the western part of the Republic to study German, Spanish and English translation and interpretation.

After graduating I finally got back to Berlin and started to work in tourism, where I realised how many people wanted to come and hear about everything that has happened here.

My passion for history came mainly from living in this amazing city but also due do the fact that over the years I met hundreds of people from all over the world who wanted to live in Berlin because of it´s fascinating history and it´s on-going changes. One of those people became my girlfriend and then later my wife – she’s Australian but knows almost as much about Berlin as I do and our shared library of books about Berlin needs ever more space in their apartment.

I have been leading tours around Berlin for nearly 10 years now, covering all aspects of the city´s history while providing tips and insider knowledge from the perspective of a true Berliner.

Through my work with the Berlin Underworld Association I also have an excellent knowledge about the WW II and Cold War bunkers of the city.

When I am not guiding people through the streets I can usually be found in the Olympic Stadium supporting my football team, the legendary Hertha BSC, or having a barbecue in the sunshine at the former Tempelhof Airport.