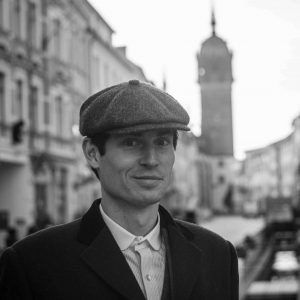 Born in a mid-sized central Canadian metropolis, Alexander Veselak grew up reading excessively. He composed scores for film and theatre prior to taking up residence in the German capital in 2008. After four years of journalism with one of Europe’s largest publishing houses and an overlapping translator-interpreter alter ego, Our Man in Berlin elected to apply himself as a docent and historian in the city he had come to know so well.

With historical context at the centre, Alexander’s tours typically involve architecture, art, design, culture, unexpected asides, and inevitably, cuisine found in Berlin. When not out on the streets expounding gently, seriously, and playfully on the bizarre, tragic, and hilarious parallels that have scarred different strata of Berlin’s past, he loves to cook, enjoy great wines, and keep his favourite 1948 Triumph Standard 14 typewriter company late into the night.