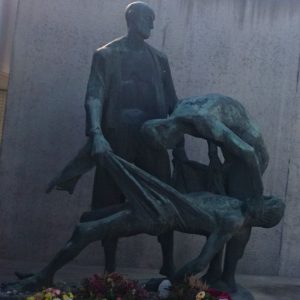 Only 35km north of Berlin, the Sachsenhausen Concentration Camp Memorial is one of the most sobering day trips you can take from the city.

Constructed as preparations for the 1936 Summer Olympics were taking place in nearby Berlin, Sachsenhausen was more than a mere ‘protective-custody’ camp to hold political opponents, it would also serve as a training ground for members of the SS and slave labour facility providing workers for the numerous factories and operations that surrounded it.

Conspicuous for its distinct triangle-shaped design, the Sachsenhausen memorial offers a window into the realities of life and death within the Nazi system. Beyond the routine brutality and human suffering, the site is also replete with tales hidden to the casual visitor, including the organisation of one of the largest currency counterfeiting operations ever recorded.

Following the end of WWII, the camp was used by the Soviet authorities to house political opponenents, Nazi functionaries and German POWs.

Transformed into a national memorial in 1961 by the East German government, it is now a place of rememberance and quiet contemplation, with the remaining buildings and grounds now open to the public.

We highly recommend you consider the accompaniment of a professional guide.

On a standard Sachsenhausen Concentration Camp tour, you can expect to see the following: