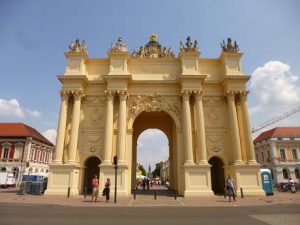 Potsdam to Berlin is like what Versailles is to Paris and it provides you with a bit of easy respite from the hustle and bustle of the German capital.

No visit to Berlin is complete without visiting Potsdam.

Directly located southwest of Berlin and with easy access via the S-Bahn train that runs every ten minutes from Alexanderplatz, Friedrichstraße, Hauptbahnhof and Zoologischer Garten, this capital of the federal state of Brandenburg is actually older, but much smaller, than Germany’s capital. It’s home to approximately 172,000 inhabitants and is world-renowned for its highly respected university.

Yet, the city’s ultimate fame lies in its historical significance for being the summer residence of the Prussian kings, princes, and German emperors of the House of Hohenzollern who cleverly tapped some of the most talented architects and landscape gardeners – whom this part of Germany has ever seen – to create a fairy-tale landscape of palaces, gardens, and churches that ranks among the most beautiful in the whole world.

Despite three Allied air raids on the city during WWII, much of the historic city center – including the charming Dutch Quarter – and most of the palaces and gardens on the northern and western parts of the city remarkably went untouched. In other words, Potsdam survived much of the Second World War; and to say that something survived the Second World War in this part of the country is truly saying something very special. It was chosen as an appropriate venue for the Potsdam Conference of 1945 where U.S. President Harry S. Truman, Soviet Dictator Joseph Stalin, and British Prime Minister Winston Churchill sat down in the Cecilienhof Palace – the residence of Crown Prince Wilhelm, the son of Kaiser Wilhelm II – over a 17 day period to talk about the fate of the post-WWII world, which would ultimately usher in the Cold War.

This would also be the site where on July 26, 1945, the so-called Potsdam Declaration was issued which called upon the Government of Japan to accept the Allies’s terms of unconditional surrender or be faced with prompt and utter destruction.

Your guide can meet you either in Berlin, or directly in Potsdam to show you Potsdam’s glorious past while exploring the historic old town and many of the palaces and gardens around the city.

On a standard Potsdam tour, you can expect to see the following: