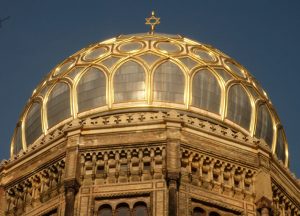 While most people think of the Nazi regime when they think of the Jewish history, it is very important to remember that the Jewish community had existed in Berlin since the city’s founding in the 1200s, and grew considerably, first in the 1670s and then in the 1800s.  With the emancipation of the Jews in the late 1800s, they enjoyed equal rights in Berlin, and their community flourished.  Of course, this all came to a devastating halt with the arrival of Hitler and the Nazi party.

There were a handful of Jews who survived WWII in Berlin, many in hiding, and stayed in the post-War period.  With the fall of the Berlin Wall, the Jewish community is slowly growing again, largely due to the arrival of Russian Jews after the collapse of communism in the Soviet Union.

On a standard Jewish Berlin tour, you can expect to see the following:

Depending on time, some guides also like to take their clients to the very moving Track 17 Monument, which is in the far western part of the city and was the train track from where the Jewish victims of the Holocaust were transported by cattle cars to concentration and death camps in Eastern Europe.  It is also possible to visit the Weissensee Cemetery, which is the largest active Jewish cemetery in Europe and was not touched by the Nazis.  It was damaged during the bombing in WWII, and then located in former East Berlin and neglected for many decades.  It is overgrown now, and is an incredible window into the lives of the Jews living in Berlin from 1888 to the present day.