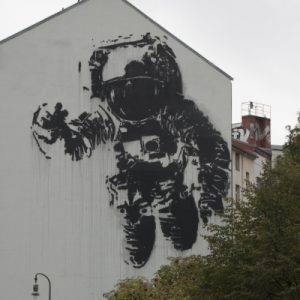 Berlin has undeniably become one of the world’s street art capitals.

In the 1980s, as Berlin stood divided, the first graffiti gang started marking their territory in the city’s southern Kreuzberg  district and the Berlin Wall’s Western side began to serve as the canvas for comments, tags and un-sanctioned murals. However, it is only over the last few decades that this city has grown into a magnet for street artists from around the world.

The Berlin Wall has largely disappeared and although memories of World War II and the Cold War are fading, the cityscape these conflicts left behind still provides artists with room for self-expression and statements. Berlin’s abandoned spaces, its streets, its empty plots of land and bare walls have become populated with a kaleidoscope of murals, graffiti, stencils, paste-ups, guerrilla knitting and more. Whether they consider themselves sprayers, graffiti writers or street artists, all can count on an evergrowing audience among Berlin’s residents and the tourists  who flock here to see their work.

While some pieces are officially commissioned, much of this streetart is legally considered vandalism, most pieces appear overnight, with a limited life expectancy, all part of an everchanging tapestry. The Berlin police actively hunt ‘trainwriters’ in order to prevent millions of Euros spent for clean-up, but there are also legal graffiti zones or spaces with a high tolerance for what is considered a relevant youth culture and form of artistic expression.

Graffiti and street art began as a form of protest and subversion: otherwise unheard voices leaving a message in the most public of forums, the street. Now, it has become so popular that galleries, once a target of street artists’ protest against the art establishment, sell it.

Advertising and election posters were and still are manipulated and/or vandalized in protest but likewise modern day advertising often uses street art’s youthful appeal for its own purpose. The landscape of street art has become diverse, much of it is unapologetically and unavoidably local, but the artists, audience and the messages transmitted are growing globally. And some say that nowhere more than in Berlin today, this movement is gathering pace. For many, touring and photographing it has become as much a city attraction as the Brandenburg Gate or Checkpoint Charlie.

On a standard Berlin Street Art & Graffiti tour, you can expect to see the following: